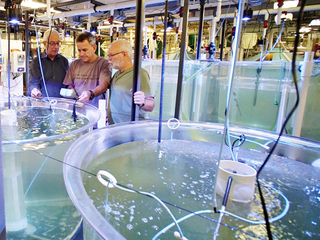 "For me, it's the Holy Grail," said Yonathan Zohar, a professor of marine biotechnology with the University of Maryland, Baltimore County and head of the aquaculture research center at the Institute for Marine and Environmental Technology (IMET) at the Inner Harbor. He is referring to unlocking the secrets of "farming" the Atlantic bluefin tuna, one of the most prized and threatened fish in the world. Dr. Zohar and his colleagues have been working tirelessly this summer to nurture newly hatched bluefin tuna larvae (microscopic in size) into juvenile fish.

Dr. Zohar and his team have been getting their fertilized bluefin tuna eggs from a "ranch" on the Adriatic Sea in Croatia. Once farmed, these eggs take a 36-hour, 5000+ mile journey to the IMET facility in Baltimore, MD. During this harrowing journey, time is of the essence. If any of the eggs begin to hatch en route, they're lost. Due to the fragile nature of the bluefin tuna eggs and larvae, the first two months are considered the bottleneck period, where attrition levels are high. Once past that point, the fish are much stronger and more stable.

Unable to generate federal funding for the project, Dr. Zohar's team have been able to get support from a foundation, and from several private companies, including BP. The budget for the project is just $450,000, with Dr. Zohar calls "very modest for such a global and a complex project."

The Atlantic bluefin tuna is the largest of all tuna, and can grow to nearly 10 feet and up to 1,600 pounds during its lifetime. It has been listed as a "species of concern" by the
National Oceanic and Atmospheric Administration (NOAA), due in large part to over-fishing. Its numbers have declined by nearly two-thirds from their 1970 level.

Dr. Zohar believes that this project can eventually help ease the pressure on wild stocks of bluefin tuna. He imagines seeing mainland hatcheries developed with large recirculating tanks capable of housing 30-40 pound fish, both for the purpose of restocking the ocean and marketing as food.