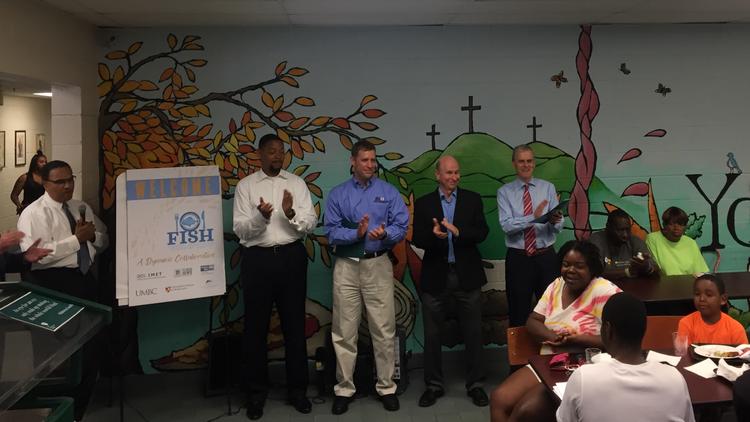 Representatives from the partner organizations involved in the FISH program at the Franciscan Center in Baltimore Monday. The program seeks to provide access to healthy sources of protein to residents in underserved communities. Participating organizations include United Way of Central Maryland,… more

Baked bronzini fillets seasoned with lemon pepper, garlic and olive oil were on the menu for lunch at the Franciscan Center in Old Goucher on Monday.

The Mediterranean sea bass that was served is the result of aquaculture research taking place at the Institute of Marine and Environmental Technology (IMET) in the Inner Harbor, and was distributed to members of some of Baltimore's most underserved communities through a new program known as FISH.

The Feeding Individuals to Support Health Project is a public-private partnership spearheaded by United Way of Central Maryland, McCormick & Co., IMET, University of Maryland, Baltimore County and seafood wholesaler JJ McDonnell. The collaboration aims to provide residents of central Maryland with access to healthy, high quality sources of protein such as the bronzini.

It's an initiative that has been several years in the making, and if it is successful has the potential to scale to the rest of the state and beyond, said Franklyn Baker, CEO of United Way of Central Maryland.

Through the program, the bronzini that is sustainably grown and harvested at IMET is then taken to JJ McDonnell's facilities in Elkridge to be turned into filets and packaged. It is then sent out to partner nonprofits such as the Franciscan Center, Maryland Food Bank, Moveable Feast and other organizations with the ability to reach the underserved community directly. The idea is to continue to increase the number of partner organizations and eventually offer the fish frozen to be prepared at home as well.

Baker said it's useful to first provide the healthy source of protein through facilities such as the Franciscan Center so that community members can learn about its benefits, how to prepare the fish and even how they like it cooked — baked, grilled and with a variety of spices.

For Baker, a sprinkle of sea salt, a little pepper and of course, some butter, goes a long way.

Sparks-based McCormick & Co. (NYSE: MKC) is providing spices for the fish, as well as healthy recipes that use simple, inexpensive ingredients. Jason McCormick, a community relations manager, said the company's Flavor for Life campaign seeks to educate residents about how to make delicious and exciting meals that are also affordable and healthy.

The FISH program is the largest and most visible project the campaign has taken on so far in it's three-year lifetime, McCormick said. Over 10 years, McCormick & Co. plans to direct $2.5 million toward the campaign.

In central Maryland, more than 319,000 individuals are without access to healthy food, according to the United Way. And for those living with financial restrictions, the average individual receiving food stamps through the Maryland Supplemental Nutrition Assistance Program gets just $30 per week.

While it is important for all individuals to eat well to prolong their lives and stay healthy, UMBC President Freeman Hrabowski said the need is especially great for children to help them perform better in school. Scientists at UMBC and the University of Maryland Center for Environmental Science are part of the 150 people at IMET working to develop environmentally sustainable methods for farming marine fish for commercial importance.

The research at IMET has been ongoing for 20 years, said Russell Hill, director and professor at the institute. Now that scientists have been successful in growing and harvesting fish in a sustainable way without releasing any pollution, they had to figure out what to do with it. The FISH program was an ideal candidate as researchers prepare for the next harvest cycle. As early as December, scientists at IMET could begin harvesting and distributing shrimp in addition to the bronzini.