“This is another line of evidence saying that oyster aquaculture can be a good thing,” says Colleen Burge, assistant professor of marine biotechnology at UMBC, and a co-author on the study.

“The established way of thinking is that disease spreads from aquaculture, but in fact aquaculture may limit disease in nearby wild populations,” adds Tal Ben-Horin, a postdoctoral fellow at the University of Rhode Island and the lead author on the study. 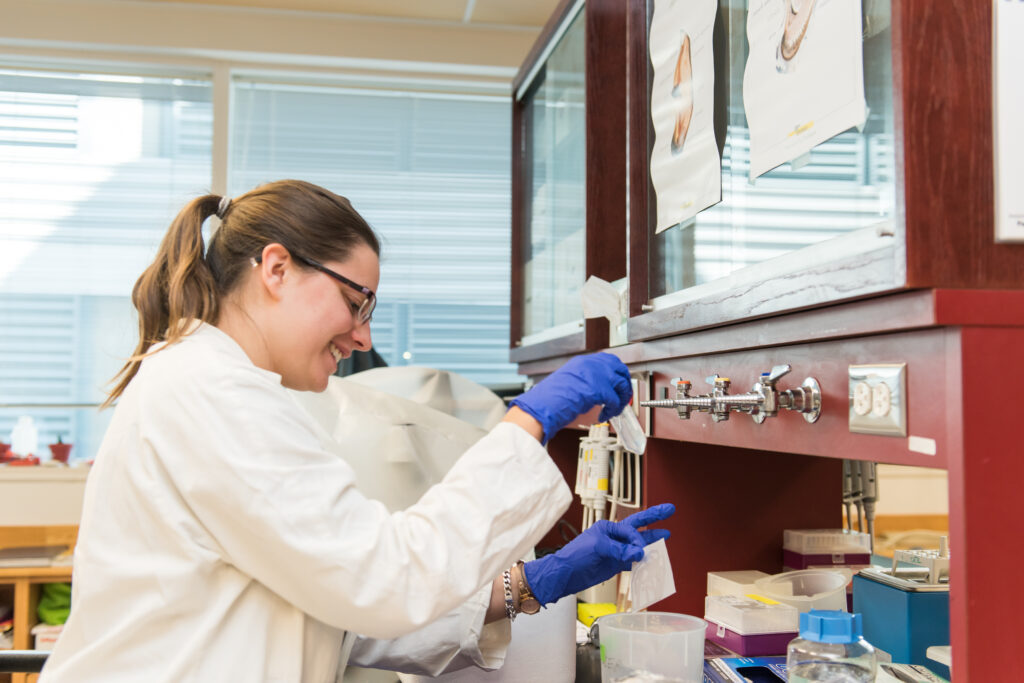 At a workshop funded by the NSF as part of the Ecology of Infectious Marine Disease Research Coordination Network, Burge co-led a session on disease transmission among sea creatures. Prior to the workshop, Ben-Horin began working on mathematical models to examine the interactions between farmed oysters, wild oysters, and the common oyster disease Dermo.

Once at the workshop, Ben-Horin, Burge, and others further explored how best to refine Ben-Horin’s models. “It was exciting to be in the room, talking to experts, bouncing around ideas about different biological systems,” Burge says.

One of the results of the NSF-sponsored workshop was the new paper. Burge and colleagues from Rutgers University, the U.S. Department of Agriculture, and the Virginia Institute of Marine Science contributed their expertise regarding oyster biology and the ecology of the oysters’ environment, and Ben-Horin used that input to inform the model. 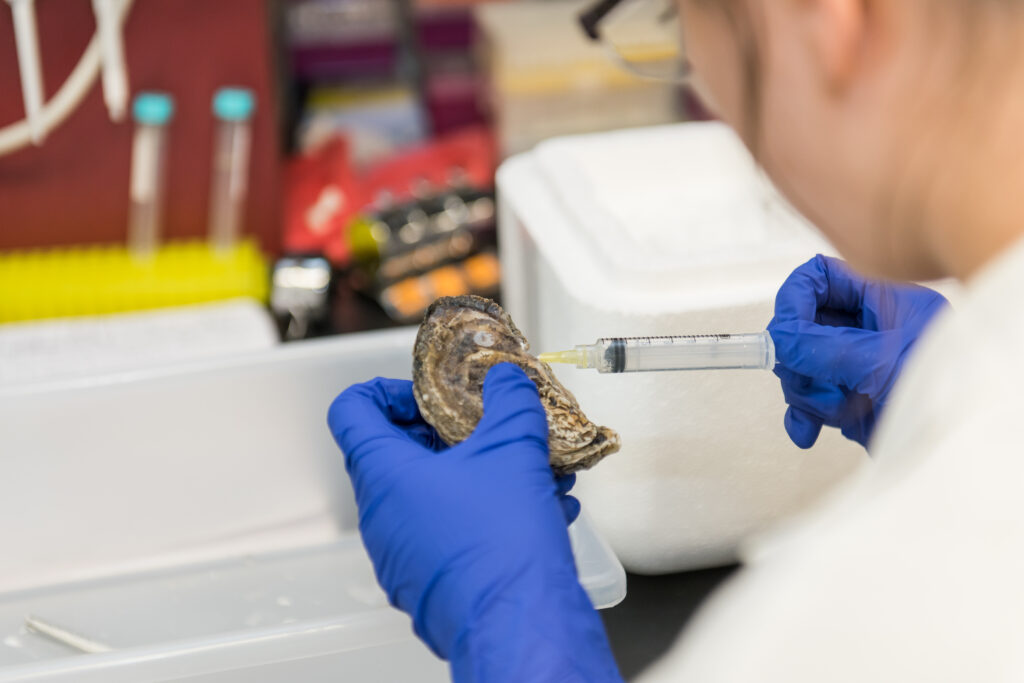 According to Burge, disease is a major factor in limiting wild oyster populations. Dermo, one of the most prevalent oyster diseases, is caused by a single-celled parasite that occurs naturally in the environment and proliferates in the tissue of host oysters. When infected oysters die, their decaying tissue spreads the parasite to other oysters. But it takes two to three years for the parasite to kill the oysters, and as long as the oysters are harvested before that time, the the spread of the parasite (which is harmless to humans) is limited.

This new research suggests that it’s time to “start thinking about oyster aquaculture as being a sink for disease, rather than a source,” says Burge. She adds that the study “furthers the idea that you can plant a large number of oysters in aquaculture, and it won’t (from a Dermo disease perspective) negatively affect the wild oysters if you harvest them early enough.”

“This paper suggests this growing aquaculture industry could actually support restoration efforts and also the wild fisheries,” Burge says. That is, as long as aquaculturists employ proper management techniques. Oyster farms that grow their product on the bottom surface of the Chesapeake Bay or other bodies of water are unlikely to recover all of their oysters, increasing rather than reducing the spread of the disease, explains Ben-Horin. Growing the oysters in cages or bags above the bottom solves that problem. 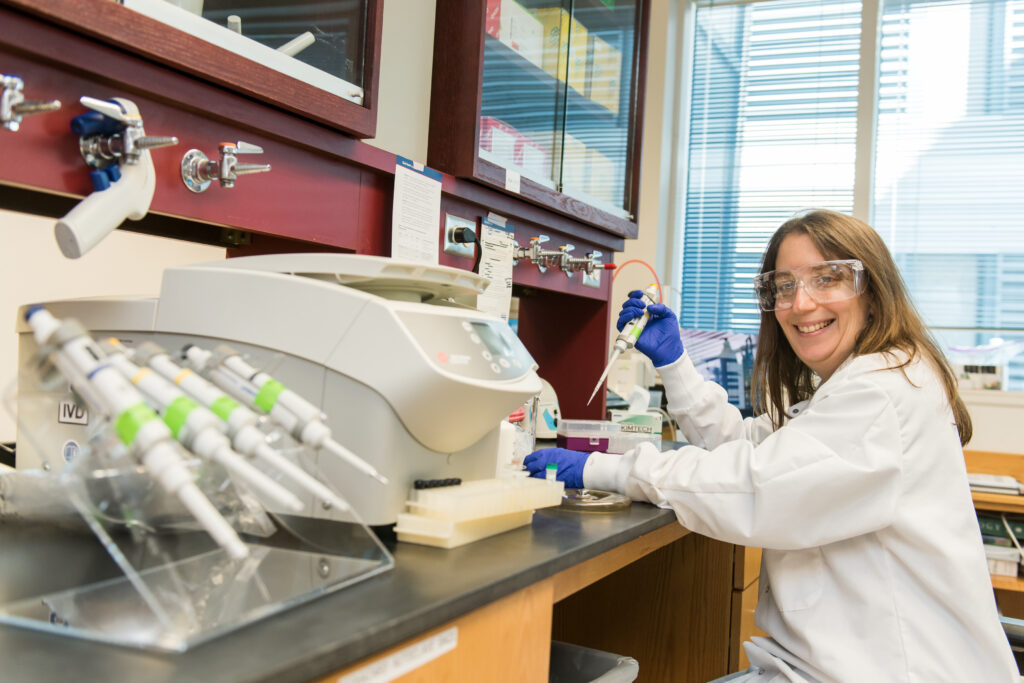 Colleen Burge at work in her laboratory.

Beyond this new study, Burge’s research more broadly explores how oysters and other bivalves work as some of nature’s most efficient water filters. She examines how they filter out pathogens that affect a range of species. In addition to supporting the current work led by Ben-Horin, she recently received funding to investigate how oysters filter out an eelgrass pathogen from water.

Eelgrass populations have been on the rise in the Bay in recent years, which is a good sign for overall Bay health. “Eelgrass is a foundational species and can provide structure for lots of different animals to live in, including fish, scallops, and other invertebrates,” Burge says. In addition, it’s been shown to moderate the water’s acidity in its immediate vicinity, possibly counteracting the negative effects of ocean acidification.

Eelgrass might even affect oysters and their diseases. “Sometimes ecosystem-level effects are overlooked, but,” Ben-Horin says regarding the new research, “in this case they’re front and center.” He reflects, “Everything that happens in the water is connected.”

All photos by Marlayna Demond ’11 for UMBC.